There is a specific offence of dangerous driving, which carries a maximum prison sentence of 2 years.

If that driving is a cause of someone’s death, the maximum sentence rises to one of 14 years.

In each case there are minimum disqualification periods, very lengthy actual disqualifications and insurance premiums which will be significant for many years to come; some drivers may not even be able to secure insurance at all, at any price.

What is dangerous driving? 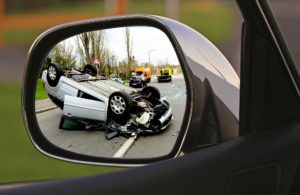 Dangerous driving is defined by section 2A Road Traffic Act 1988:

“…a person is to be regarded as driving dangerously if (and, subject to subsection (2) below, only if)—

There is also a further element of dangerous driving related to unsafe vehicles, but we are not looking at that in this article.

The test is an ‘objective one’ which means that it is not to be judged through the eyes of the actual driver but the eyes of a ‘competent and careful driver’. Effectively, therefore, it will be for a magistrate/judge, or jury to decide.

The crucial part of the test is that the driving falls ‘far below’ the standard expected, and it is this that on occasion makes advising in these cases such a very skilled task.

In some instances, it will be obvious that the driving falls ‘far below’ the required standard. So, if you drive at 100 mph on the wrong carriageway of the motorway at night without lights, there is no room for debate.

But, what if, believing that you have sufficient sight of the road ahead, you overtake only to hit an oncoming vehicle in the opposite lane. Is that driving ‘far below’ the standard, or it is simply an unfortunate error of judgment, one that could perhaps be properly categorised as careless driving not dangerous?

There is no statutory definition of what is meant by “far below”, but section 2A(3) of the 1988 Act states that “dangerous” must refer to the danger of personal injury or serious damage to property.

We also know from case law that the driver’s particular skill or lack of is not relevant (Bannister [2009] EWCA Crim 1571).

The Crown Prosecution Service regards the following as being examples of dangerous driving, but it must be stressed that ultimately it will be a matter for the court to decide, and a full exploration of the circumstances of the alleged offence is required:

Att.Gens’ Reference No 32 of 2001 (2002) 1 Cr.App.R. (S) 121 (offender failed to stop at a junction where there was a give way sign, failing to see a taxi that was being driven across the junction perfectly properly and colliding with it);

Att.Gen’s Reference No 4 of 2000 2000]) EWCA Crim 780 (offender unintentionally pressed the accelerator instead of the brake);

Att.Gen’s Reference No.76 of 2002 (Hodges) (2003) 1 Cr.App.R. (S) 100 (offender drove across a junction marked by a give way sign and collided with a car that was being driven along the major road and had no explanation for his failure to see the other car) “this was a single misjudgement. It was a bad misjudgement but nevertheless a single one”

Some of the examples in the above list may seem surprising, for example where a person unintentionally pressed the accelerator instead of the brake. Again, it is worth stressing that much will depend on what actually happened, with concepts such as ‘…even for only a short time…’ being open to argument.
Similarly, when does ‘…failing to have proper and safe regard…’ (a legal duty anyway) stray over the line from being careless driving to dangerous driving
And, is ‘overtaking which could not have been carried out safely…’ something that is inherently in danger of being judged by hindsight?

In stressful situations, particularly where serious harm has been caused, there is an instinctive reaction to think that the driving error must have been very serious.

What we know of course is that on occasion even the slightest error can result in very serious consequences. It is therefore vital that if interviewed by police following an accident that you secure legal representation at the outset.

All legal advice and assistance at a police station is free of charge, irrespective of your financial means.

Accident investigation and reconstruction is now an important consideration in these cases, allowing scientists and engineers to see exactly the cause(s) of an accident and the extent of error, often exposing the culpability of others.

Eye-witness evidence is not always dependable and is also often tainted by the result of the driving as opposed to the driving itself.

In some cases, it will be straightforward, but there may still be room for movement and a plea to the lesser offence of careless driving may be an option.

Whether an act of driving amounts to dangerous driving is often not easy to determine, but our experienced lawyers routinely deal with all manner of driving cases, from the minor to the most serious.

Whether facing imprisonment or not, the loss of a driving licence is for many people an incredibly serious penalty in itself, so all steps should be taken to avoid that happening.